Ketosis and hypocalcaemia are not the cause of transition problems, they are the result of systemic inflammation

Only 50% of dairy cows in North America complete the transition period without experiencing one of the following health problems[1] :

During the HealthyLife webinar on February 25, 2021, Professor Lance Baumgard challenged the existing dogma that transition problems in dairy cows ae caused by high NEFA and hypocalcemia. Recent evidence suggests that systemic inflammation requires major metabolic adaptation that can ultimately impact productivity, reproduction and health. Around calving, inflammation can originate from multiple sources including the uterus and the mammary gland, but also a “leaky gut”.

pH and production of LPS in rumen, caecum and faeces of cows fed high amounts of grain compared to control cows. Increasing the level of starch decreased pH and increased LPS both in the rumen and the hindgut (Adapted from Li et al, 2012)39.

The traditional belief is that increased NEFA, hyperketonemia and hypocalcemia cause production and health problems in dairy cows.

Retrospective and observational studies in dairy cows associate and correlate NEFA and BHBA with problems during the transition to lactation[2,3,4,5,6] , but on the other hand, hyperketonemia and hypocalcemia are sometimes correlated with increased milk production. Thus, there is little mechanistic evidence for how NEFA, ketones and calcium can directly have such a large influence on a variety of seemingly unconnected systems and diseases (see figure 1).

The ketosis dogma has always been that excess adipose tissue mobilization causes fatty liver and ketosis. This problem is exacerbated in high producing dairy cows. Based on this, the academic and industry goal has been to reduce blood NEFA levels. But why would evolution favor a scenario where the mother endangers herself and compromises her ability to nourish her young?

NEFA’s and ketones are fuels that have been used since almost the beginning of time. All mammals metabolically ebb and flow and periodically use both fuels. Even microbes store and oxidize fatty acids! Immune activation decreases feed intake across species and phyla, even in insects. Ketosis is normal and the best strategy utilized to survive periods of nutrient insufficiency. Mobilization of adipose tissue and partial conversion of NEFA into Ketones is essential for maximum milk yield of dairy cows in early lactation.

The hypocalcemia dogma has always been that milk uptake of calcium is so quick and extensive that it exceeds the homeostatic capacity of dairy cows to replenish it. Based on this, the academic and industry goal has been to minimize post-calving hypocalcemia in dairy cows. One of the biggest advances in dairy nutrition during the last 30 years has been that clinical milk fever has almost been eliminated with pre-calving dietary calcium strategies. Subclinical hypocalcemia is presumed pathological and it has been universally agreed that clinical hypocalcemia is a negative outcome. Hypocalcemia is putatively a causal factor in periparturient immunosuppression, leading to an increased risk of metabolic diseases in dairy cows (i.e., mastitis, metritis, displaced abomasum).

Systemic inflammation is observed in almost all transition cows[7,8,9] . It could come from mastitis or metritis, but also from the gastro-intestinal tract. This could be the rumen, but there is more and more evidence that it could also be the hindgut. Systemic immune activation results in absorption of LPS from the gut lumen into the circulation (see figure 2).

Figure 2, LPS (lipopolysaccharide) is absorbed from the gut and binds to LBP (lipopolysaccharide binding protein). The LPS-LBP complex activates the TLR4 (toll-like receptor 4), which induces a systemic inflammatory response and an increase of acute phase proteins in the circulation.

Inflammatory mediators are known to be potent anorexic compounds[10] . Reduced feed intake is a highly conserved species response to infection[11] , even insects show a decrease in feed consumption in response to an infection. It has been shown that dairy cows with increased haptoglobin levels in heir circulation have decreased DMI but also an increase of NEFA and BHB[7] . Inflammation is the simplest and most logical explanation for why some transition cows don’t eat well before and following calving. It has been shown that increased blood haptoglobin levels precede clinical disease[12,13] (see figures 3 and 4).

Based on aforementioned evidence, increased NEFA and hyperketonemia are believed to be caused by immune activation induced hypophagia and hypocalcemia is also a consequence of immune activation. According to this theory, low feed intake, high NEFA, hyperketonemia and hypocalcemia in dairy cows are merely symptoms of prior immune stimulation (see figure 5).

Thus, if a dairy cow with ketosis is not coming into milk, is not aggressively eating, looks lethargic and melancholic and has a mild fever, it should be treated for ketosis. If however, she is eating like a champ, milking like a world-record holder, looks great and has no fever, she might be one of the best cows in the herd, don’t treat her, leave her alone!

Immune activation and subsequent inflammation play an important role in transition cow metabolic disorders. High NEFA, ketones and subclinical hypocalcemia are not necessarily bad, as long as the cow is otherwise healthy (eating and milking well). Immune activation may be responsible for some incidences of post-calving hypocalcemia. This hypocalcemia might however be a protective strategy a dairy cow enlists to help clear her toxin load[14] . If systemic immune activation in dairy cows is the cause of a reduction in feed intake, the solution is to prevent immune activation to ensure maximum dry matter intake after calving. 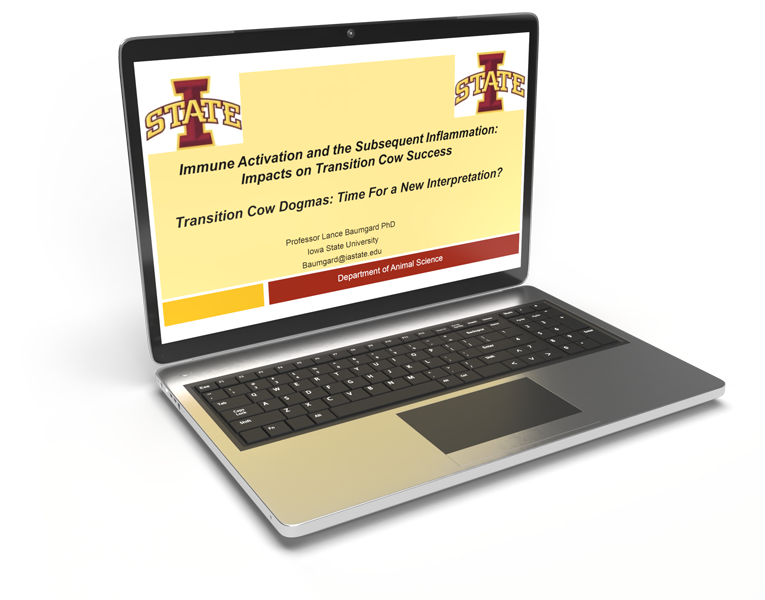 Immune activation and the subsequent inflammation: Impacts on transition cow success? Professor Lance Baumgard PhD, from the Iowa State University, elaborates on the transition cow dogmas. Is it time for a new interpretation?

You can access all of our documentation about HealthyLife protocols, sustainable dairy farming and latest research insights about Dairry Cow transition management.

Immune activation and the subsequent inflammation: Impacts on transition cow success? Professor Lance Baumgard PhD, from the Iowa State University, elaborates on the transition cow dogmas. Is it time for a new interpretation?